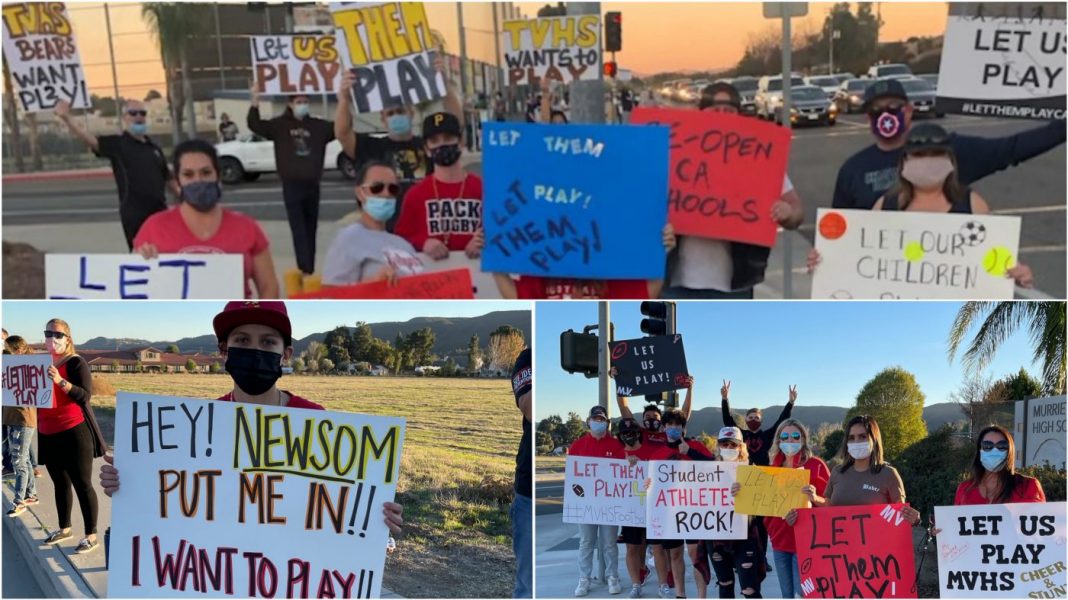 Football can return on Feb. 26 in red and purple tiers

In what was a huge victory for return-to-play advocates, California Gov. Gavin Newsom updated the state’s guidance on the return of youth and high school sports Friday, Feb. 19. The news clears a path for the return of football and other outdoor sports but leaves a huge gap in what can be expected for our athletes here in Southwest Riverside County.

High school football and other outdoor sports will be allowed to resume play across many parts of California for the first time in nearly 12 months, the state Department of Public Health announced in conjunction with Gov. Newsome’s update. According to the updated guidance, outdoor high-contact sports can be played in counties in the purple and red tiers if the counties have a case rate at or below 14 per 100,000. The guidance goes into effect on Feb. 26. Riverside County currently boasts a 28.8 case rate (per 100K residents).

“This is a move in the right direction but by no means have we reached the finish line,” says Chaparral baseball parent, Bob Hess. “Thanks to grassroots movements like #LetThemPlayCA the science and data are finally being shared with Governor Newsom and other State and local officials. The data confirms the safety with which our student-athletes can play youth sports. While this is still a numbers game, we finally have a roadmap which provides hope for our student-athletes. This is a hope that did not necessarily exist a few weeks or months ago.”

Indoor sports were left untouched, without compelling evidence they can be played safely. Higher-contact sports that have been approved to play must also adhere to new guidelines, namely a weekly testing regimen. The CDPH last released updated youth sports guidelines on December 14. Those guidelines pushed back the California high school sports season to Jan. 25.

Since the statewide Stay-At-Home order was lifted, sports in the purple tier could begin to be played if districts and private schools allowed them and the sport is in its designated season of sport. The only Season 1 sport allowed to be played in the purple tier was cross country. The other Season 1 sports consist of traditional competitive cheer, field hockey, football, gymnastics, girls’ volleyball, and water polo. Previously, those were not allowed to be played.

The tiered system monitors every county’s COVID-19 test positivity and adjusted case rate and is still in effect, but youth sports are now no longer tied to it. Here is how the tier system works, according to the California Department of Public Health.

At a minimum, counties must remain in a tier for at least 3 weeks before moving forward. Data is reviewed weekly and tiers are updated on Tuesdays. To move forward, a county must meet the next tier’s criteria for two consecutive weeks. If a county’s metrics worsen for two consecutive weeks, it will be assigned a more restrictive tier. Public health officials are constantly monitoring data and can step in if necessary.

“Unfortunately, right now it looks like Riverside county is far from the threshold,” says Shira Smith, who has a senior that is a cheerleader. “Why can’t Newsom just make it fair for everyone to play.”

Dr. Tomás Aragón, the state’s public health officer, cited declining rates of infection across the state as a key factor for the timing of the announcement, which return-to-play advocates have been anticipating all week after nearly two months of negotiations.

“Youth sports are important to our children’s physical and mental health, and our public health approach has worked to balance those benefits against COVID-19 risks,” Aragón said in a statement. “With case rates and hospitalizations declining across California, we are allowing outdoor competition to resume, with modifications and steps to reduce risk, in counties where case rates are lower.”

While indoor sports, like basketball and wrestling, remain unlikely to happen this spring, return-to-play advocates were enthused by the decision but exasperated by a long process.

“I am so excited for athletes of these outdoor sports,” says Jen Tarbox, a Sacramento Country parent of a soccer player and volleyball player. “It can’t stop there though! There are plenty of students who are indoor sports such as volleyball, basketball, wrestling, who rely on the same opportunities as football players to be looked at for scholarships as well as for their mental and emotional health. The fight continues.”

Football players, as well as athletes who play rugby or water polo, will also be required to be tested weekly if their home county has a case rate above 7/100K. That is because those sports are “likely to be played unmasked, with close, face-to-face contact exceeding 15 minutes.”

Other sports defined as moderate contact, such as baseball, softball, and cheerleading, will not be subject to the testing requirement but it was recommended for athletes in all sports. California is one of 26 states to have delayed its winter basketball season into 2021, according to the National Federation of High Schools, but it is one of only seven where play still has not begun. Similarly, it was one of 24 to delay its wrestling season and is one of 14 to have not started contests, according to NFHS.

Under the modified California Interscholastic Federation calendar, basketball and boys’ volleyball seasons are set to begin in March with potential postseason in June, but it looks as if those sports will likely not see competition. Whether health officials surrender in time for a season to be played remains unknown. In the fall, California was one of 15 states to delay its football season until 2021, according to NFHS. By mid-February, however, every state but California, Hawaii, Maine, Rhode Island, and Connecticut had scheduled a start to its season.

“Now is the time to double down on the pressure we apply to our government officials,” added Hess. Parents, students, and athletes should continue to write letters, make phone calls, post to social media pages. Continue to collect data that supports the safe return to school and sports. It is important that our elected officials understand that we hold them accountable. It is no longer ok to hide behind false data, arbitrary numbers, or political party lines. It is time for our leaders to recognize the damage that has been done and continues to be done to our students, our athletes. While today’s announcement is a step in the right direction (and a victory for some) we must continue to fight the good fight for all California students and athletes. We must #LetThemPlayCA.”

The battle now moves to local health authorities, who could still restrict competition beyond the newly relaxed state rules. As for the return-to-play movement, sources say they will attempt to transition their success from the gridiron to the hardwood.